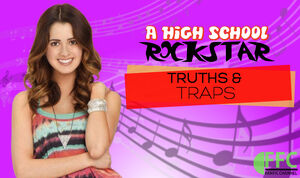 Truths & Traps is the second episode in Season 3 of A High School Rockstar. It aired on November 2, 2013. It was part of Spooktober

After hearing that his parents were still alive, Aaron interrogates Mike and Mimi if they knew anything about it. Meanwhile, Team Austin visits a local haunted house to get inspiration for Austinʼs new song, but gets trapped and has to stay for the night. As they explore the house, one by one, Austin, Ally, Trish, Lexi and Tyler starts disappearing after triggering the traps that were set up almost a hundred years ago and it is up to Dez to get them out.

Retrieved from "https://ahighschoolrockstar.fandom.com/wiki/Truths_%26_Traps?oldid=9208"
Community content is available under CC-BY-SA unless otherwise noted.