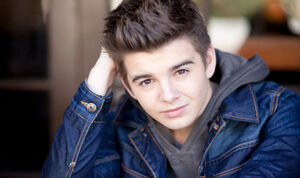 Tyler Fox is a 23-year old rich cool jock who works at the mall. He goes to a private expensive school together with Alison Marche and Jennifer Mane. He transferred to Miami Senior High School and is dating Samantha Bennett He is portrayed by Jack Griffo

Tyler Fox is the sweet, kind and lovable rich kid who goes to a expensive private school. Unlike his girlfriend Alison Marche, Tyler cares about his friends, even if they came from the public school. He helps his friends when they are in need. He works at the mall as an employee at Bill's Surfshop. Tyler is the son of Gerry and Kathryn Fox, the CEO and owner of the company ThinkIt Incorporation. He is very responsible and idependent. Even though his parents own the Mall of Miami, He still works because he doesn't want to depend on his parents for everything. He sometimes sings and plays instruments. His dream is to be in a band.

He transfered to Miami Senior High together with Jennifer. He then falls for Samantha after he mistakenly thought that Sam left him a secret admirer letter. Tyler is a great friend, helping them even when choosing the right style to wear. He seems t have a great taste in fashion, or as they call it, "Swag". Tyler is a tough jock but has lots of fears like a fear of clowns and a fear of heights and flying. Still, he has great perseverance and focus that he can overcome this fears, although not instantaneous.

Tyler is not afraid to say what's on his mind, even if it may not come out as great. He's very honest and goes straight to the point.

Tyler is first introduced in this episode as Alison's boyfriend. He walks into Sonic Boom with only board shorts, which was part of Billl's way to attract customers. He also encourages Alison to work at Sonic Boom but causes Ally to be challenged by her. Tyler apologizes for Alison and tries to help Ally to do the spelling bee without having to go up on stage. He breaks up with Alison after realizing that she was not the perfect girl for her. He also reveals that their parents set them up together.

Tyler is caught in the middle of a war between Team Austin and their enemies, Demonica Dixon and Tilly Thompson. He then helps in making sure that nothing happens to Austin & Ally's party and that he tries to help the others track them down before something bad happens.

Retrieved from "https://ahighschoolrockstar.fandom.com/wiki/Tyler_Fox?oldid=9686"
Community content is available under CC-BY-SA unless otherwise noted.