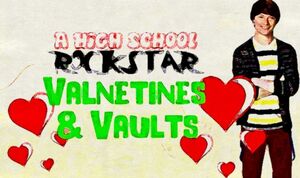 Valentines & Vaults is the seventeenth episode in Season 2 of A High School Rockstar.It is scheduled to air on February 16, 2013, together with Competitions & Clowns. It is a Valentine's Day Special.

Austin plans a special dinner with his friends and with Ally at Sonic Boom to celebrate Valentines Day, but they get trapped in the Vault in an under construction bank at the mall. Trish then misunderstood a text from Aaron, and assumes that they were kidnapped causing chaos.

Retrieved from "https://ahighschoolrockstar.fandom.com/wiki/Valentines_%26_Vaults?oldid=9648"
Community content is available under CC-BY-SA unless otherwise noted.