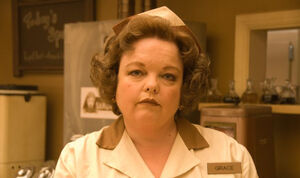 Valorie Hubbard is an actress.

Valorie started acting at the age of 3 when she dramatically threw herself down a staircase. When her mother discovered she was still alive she enrolled her in creative dramatics class where she has been acting ever since. She attended The Goodman School of Drama and migrated to New York where she spent the next 20 years.

Some of her favorite credits in New York include The Crucible at The Roundabout Theatre, The Country Boy at Irish Rep, The Sweepers at Urban Stages and The Queen Bee's Last Stand also at Urban Stages. Regionally Valorie worked at NJ Shakespeare Festival, Delaware Theatre Co., The Wilma Theatre, Weston Playhouse, Missouri Rep and The Lab Theatre in Poland. Valorie was asked to be a member of the last international company to work at the Lab Theatre. She has also collaborated with an amazing range of acting professionals including John Guare, Joseph Chaiken, Toni Kotite, Neel Keller and Zbigniew Cynkutis.

Retrieved from "https://ahighschoolrockstar.fandom.com/wiki/Valorie_Hubbard?oldid=9473"
Community content is available under CC-BY-SA unless otherwise noted.