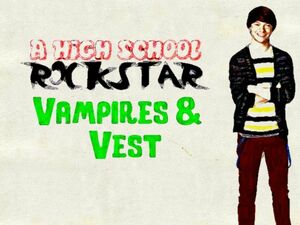 Halloween is nearing but the spook in Miami is already starting. Famous singer, Jane Grant, visits Miami to perform in the Mall of Miami and Dez thinks that she is a vampire. After much investigation, the gang has come to a conclusion. They plan an attack to stop the evil plans of a vampire that is trying to kill everyone, including Austin.

Retrieved from "https://ahighschoolrockstar.fandom.com/wiki/Vampires_%26_Vests?oldid=7979"
Community content is available under CC-BY-SA unless otherwise noted.