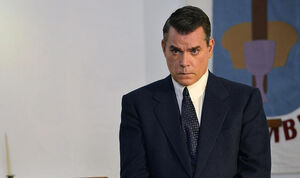 Warren Carter is Miami Senior High School's principal since the school first opened. He is portrayed by Ray Liotta

Warren Carter is a strict but sometimes a fun principal. He has been loyal to the school since it first opened. He is not the best principal, but has helped the school in many ways. He does not have a life partner as he often goes on online dating sites. He also has cats as his companions.

He is friends with Lester Dawson, but prefers to be called Mr. Carter or Principal Carter when in the school instead of his first name. He admits getting lonely sometimes, which drives him to find a life partner. He regrets a decision he made of choosing cats over puppies.