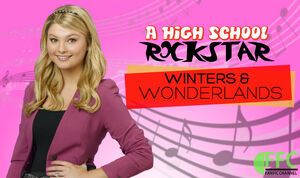 Winters & Wonderlands is the sixth episode of Season 3 of A High School Rockstar. It is also the Christmas episode for 2013. It aired on December 21, 2013 as part of FFC's Fa-La-La-Lidays.

Austin does everything he could to impress Ally, even making it seem like winter in Miami. Meanwhile, Dez shoots a movie entitled, Wonderland, where he recruits the whole team and a few others to star in his movie. But for the third time in history, a snow storm hits Miami, causing chaos at the mall.

Retrieved from "https://ahighschoolrockstar.fandom.com/wiki/Winters_%26_Wonderlands?oldid=9484"
Community content is available under CC-BY-SA unless otherwise noted.