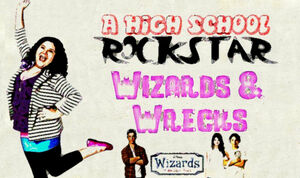 While still in New York, Austin meets the Russo Family, where he suspects that they have a big secret. After seeing Alex Russo use magic, he stops to nothing until the Russo admits they are wizards. The Russo then helps Dez fix the wreck that he made at the Dinosaur Museum.

Retrieved from "https://ahighschoolrockstar.fandom.com/wiki/Wizards_%26_Wrecks?oldid=9655"
Community content is available under CC-BY-SA unless otherwise noted.