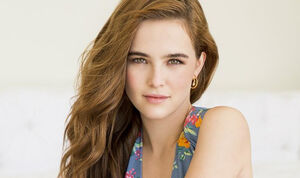 Deutch was born in Los Angeles, California. She attended Oakwood School, as well as The Los Angeles County High School for the Arts, where she majored in Theatre. She is the daughter of actress Lea Thompson and director Howard Deutch. She is currently in a relationship with Avan Jogia from Nickelodeon's Victorious.

She began her career in 2010 on the Disney Channel Original Series The Suite Life on Deck as Maya, Zack Martin's love interest. From 2011 to 2012, she had a recurring role as Juliet Martin on The CW series Ringer. In 2011, she appeared in an episode of the television series NCIS titled "One Last Score". She also appeared in an episode of the television series Criminal Minds: Suspect Behavior titled "The Girl In The Blue Mask" and she landed a role in Marc Cherry's television film Hallelujah. She appears alongside her mother and sister on the big screen in film Mayor Cupcake.

Retrieved from "https://ahighschoolrockstar.fandom.com/wiki/Zoey_Deutch?oldid=9435"
Community content is available under CC-BY-SA unless otherwise noted.